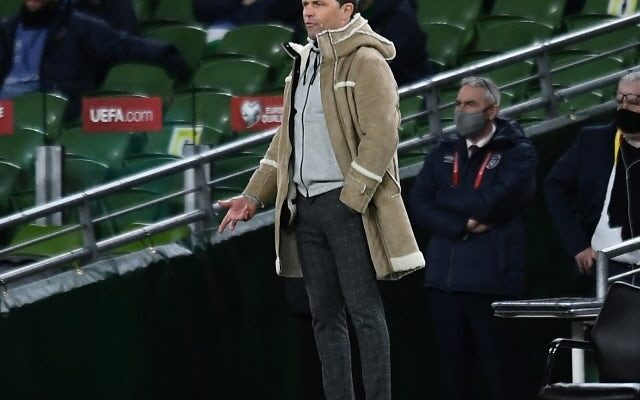 Republic of Ireland will be looking to round off their World Cup 2022 qualification campaign on a positive note when they make the trip to Luxembourg on Sunday night.

Stephen Kenny‘s side, who are fourth in Group A, will enter the contest off the back of a goalless draw with Portugal, while third-placed Luxembourg recorded a 3-1 victory away to Azerbaijan.

Luxembourg will have to assess the fitness of Yvandro Borges Sanches, who was replaced in the early stages of the second half against Azerbaijan, but the home side are otherwise in excellent shape heading into this match.

Head coach Holtz will be determined to end the campaign on a positive note, so it would be a surprise to see wholesale changes, although Sebastien Thill, who has impressed for Sheriff Tiraspol in the Champions League this season, is pushing to come into the starting side.

Gerson Rodrigues, who is currently on loan at Troyes from Dynamo Kiev, scored twice on Thursday night, and the 26-year-old is again expected to lead the line for Luxembourg.

As for the Republic of Ireland, there are expected to be at least a couple of changes to the side that took to the field against Portugal on Thursday night.

Indeed, Adam Idah could replace Jamie McGrath in the final third, while Conor Hourihane could come in for Jeff Hendrick in the middle of the park.

Like Holtz, ROI boss Kenny will want to end the campaign on a positive note, so wholesale changes are unlikely, with Seamus Coleman, Matt Doherty, Shane Duffy and John Egan all set to retain their spots.