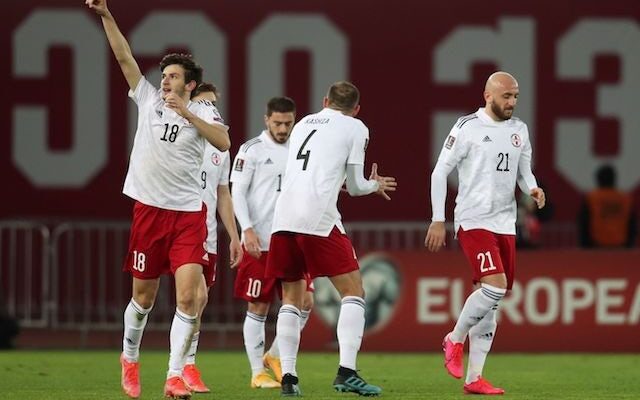 Sweden will aim to cement their position at the top of the rankings in World Cup 2022 Qualifying Group B when they take on Georgia on Thursday night.

The Scandinavian powerhouses marched to a 2-0 success over Greece last time out, while their hosts are only playing for pride after an early elimination.

Nineteen-year-old Irakli Azarovi ought to feature at left-wing back with Giorbelidze suspended, while Dvali’s spot in the heart of defence could be filled by FC Copenhagen’s Davit Khocholava.

Sagnol should otherwise keep changes to a minimum following his side’s first win, with Liverpool and Tottenham Hotspur-linked Khvicha Kvaratskhelia once again starting in attack.

Meanwhile, Sweden attacker Ken Sema has been forced to pull out of the squad due to injury, and Albin Ekdal will sit out this clash due to an accumulation of bookings.

Bologna’s Mattias Svanberg is the most likely candidate to fill in alongside Kristoffer Olsson, while Zlatan Ibrahimovic has made the cut but will certainly not start twice in quick succession.

Andersson will certainly be tempted to keep some of his big-hitters in reserve for the meeting with Spain, with Isak and Victor Lindelof also among those who may be spared.