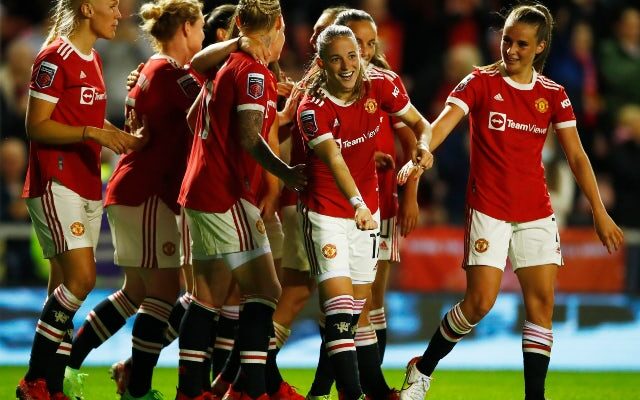 Jean-Luc Vasseur is looking for his first Women’s Super League victory with his new Everton Ladies side on Sunday, when Manchester United Women visit Walton Hall Park in gameweek seven.

Marc Skinner‘s side travel to Merseyside looking to pick up three points after a trio of draws in all competitions, leaving the Red Devils currently sitting fifth in the WSL.

After arriving back at the club in the summer, Toni Duggan will be disappointed that she has not reopened her Toffees account in her first six league appearances this season, but she will lead the line for the home team.

Christiansen, Aurora Galli and Hanna Bennison will continue to operate as the midfield three for Everton, while goalkeeper Sandy MacIver will want to claim her second league clean sheet.

Wales international Hayley Ladd was handed her first WSL start of the season for Man United against Tottenham, as she came into the side in place of Jackie Groenen.

After coming off the bench in the first three games, Russo has now claimed her spot in Skinner’s starting lineup and has scored twice in her three WSL starts, taking her season total to three, the most out of any of her teammates.

For the last four WSL games, Man United’s defensive four have been consistent starters, and that will continue on Sunday, meaning that Hannah Blundell, Maria Thorisdottir, Aoife Mannion and Ona Batlle will all be named on the team sheet.