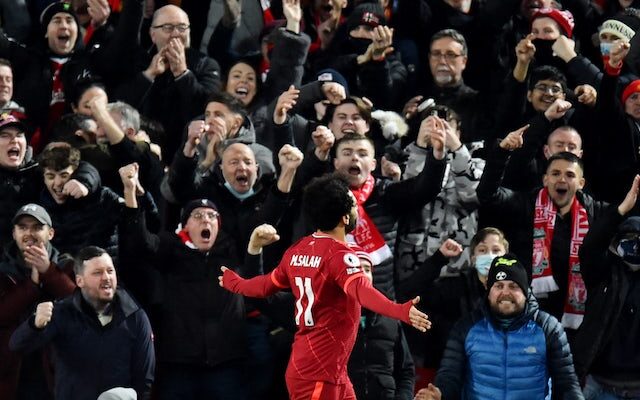 Mohamed Salah has equalled Jamie Vardy‘s record of either scoring or assisting a goal in 15 successive Premier League games courtesy of his strike against Newcastle United this evening.

The Liverpool winger has been in blistering form so far this season, with his goal against the Magpies being his 15th in the Premier League already this term.

Salah has also weighed in with nine assists from his 17 Premier League appearances in 2021-22, leaving him at the top of both the goalscoring and assists charts.

A number of records have already been sent tumbling by the 29-year-old this season, and he equalled another one at Anfield by directly contributing to a goal for the 15th Premier League match in a row.

Only Vardy in 2015 has ever achieved that before, and Salah will now have the opportunity to move out on his own when Liverpool face Tottenham Hotspur on Sunday.

The prolific attacker followed up a Sadio Mane strike which had been saved to slam home the rebound and bring up the milestone, continuing his remarkable form in the final third.

Was always going to be him 🤗

Another goal, another record for the Egyptian 👏 pic.twitter.com/kawB5aNOiX

The last time Salah failed to score or assist in a Premier League game came back on August 21, when Liverpool beat Burnley 2-0.