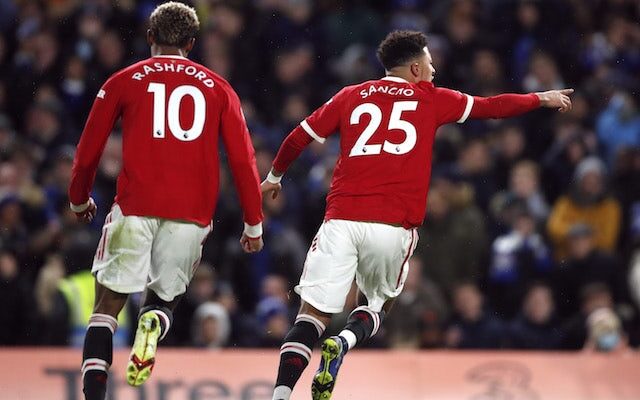 Jadon Sancho has scored his first Premier League goal to give Manchester United the lead against Chelsea at Stamford Bridge.

The league-leading hosts had dominated the first half without being able to break the deadlock, as an Antonio Rudiger thunderbolt which cannoned off the crossbar was the closest they came.

Chelsea had also begun the second half confidently until Man United hit them on an unorthodox counter-attack, with Bruno Fernandes – chosen in a false nine role as Cristiano Ronaldo was left on the bench – hoisting the ball high from the edge of his own box.

Jorginho was the only player back for Chelsea and tried to take it down despite Sancho and Marcus Rashford both bearing down on him, and the Italian’s heavy touch allowed Sancho to nip in.

The duo then raced through on goal to leave Edouard Mendy facing a two-on-one situation, and Sancho ultimately used the presence of Rashford to help him slot home.

It has come out of nowhere, but #MUFC have capitalised on a woeful Jorginho error to lead #CFC 1-0.

The goal is just the fifth Chelsea have conceded in the Premier League this season, while it sees Sancho net in back-to-back matches for Man United following his Champions League strike in midweek.