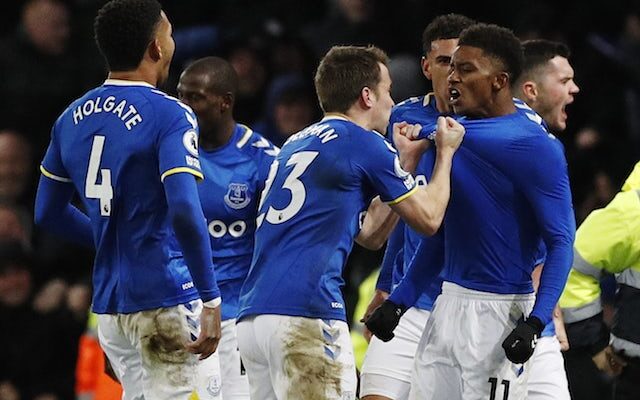 Everton have beaten Arsenal and ended their eight-game winless streak in the Premier League courtesy of a stunning winner in injury time by Demarai Gray.

The Toffees went into the match amid reports of a planned mass fan walkout in protest at the club’s recent record both on and off the pitch, and with pressure growing on manager Rafael Benitez following a run of just two points from the last 24 available.

It appeared as though Everton would again be left waiting for a first win since September when Richarlison saw two goals disallowed by VAR due to marginal offside decisions.

Martin Odegaard gave Arsenal the lead shortly after the first of those and only moments before half time, sending the Gunners into the break at Goodison Park with a slender advantage following an uneventful opening 45 minutes.

However, Richarlison finally got his name on the scoresheet with a smart looping header over Aaron Ramsdale after Gray had clattered the crossbar from range.

Gray himself then secured the win in the second minute of injury time with an unstoppable long-range strike which went in off the post, sending the home fans into delirium.

Everton take the lead in stoppage time after an absolute SCREAMER from Demarai Gray – what a hit! 🚀 pic.twitter.com/yM7RjM3wbA

Arsenal had chances of their own to still get something out of the game, but Eddie Nketiah could only hit the post from point-blank range before Pierre-Emerick Aubameyang squandered a clear opening with the last kick of the match.

The result sees Everton move up to 12th place in the Premier League table, while Arsenal remain seventh.