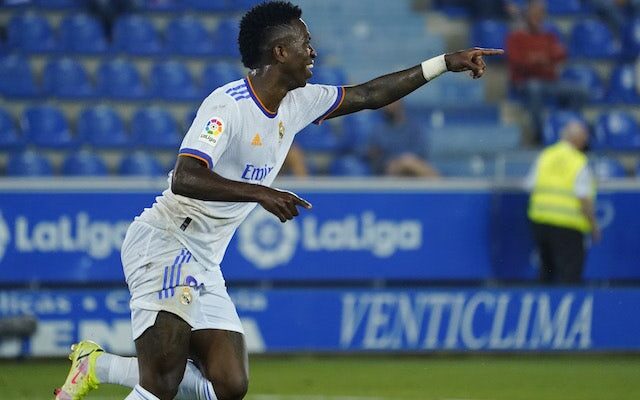 Real Madrid attacker Vinicius Junior has said that he wants to stay at the Bernabeu “for a long time” amid suggestions that Los Blancos are preparing to open talks over a new contract.

The 21-year-old has been in excellent form for Carlo Ancelotti‘s side during the 2021-22 campaign, scoring nine times and registering five assists in 14 appearances in all competitions.

Vinicius still has four years left to run on his contract at the Bernabeu, but it is believed that the Brazilian is one of the five lowest-paid players at the club.

A recent report claimed that Real Madrid are planning to open contract talks with the attacker, and the South American has said that he is determined to renew his deal.

“Of course I want to renew,” Vinicius told TNT Brazil. “I want to stay here for a long time, but I am very calm with all that, all at the right time.

“The contract I have is still the one from when I was 16, it doesn’t matter when I’m going to renew, how much I’m going to earn, what matters is the satisfaction of being at the best team in the world.”

The youngster has scored 23 goals and registered 28 assists in 132 appearances for Real Madrid since arriving from Flamengo in July 2018.