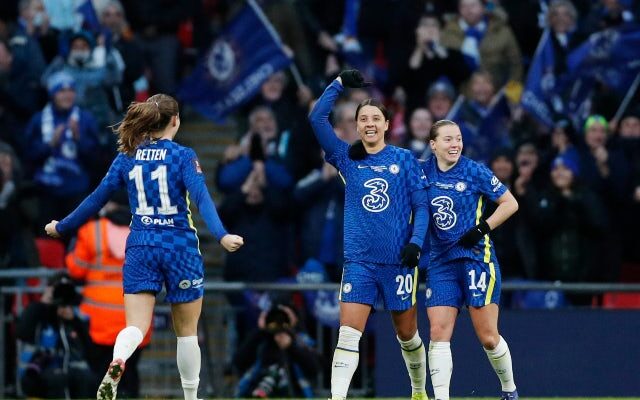 Chelsea Women forward Samantha Kerr stole the show as Emma Hayes‘s side eased to the 2020-21 FA Cup crown with a 3-0 win over Arsenal Women.

Without the injured Leah Williamson marshalling the backline, Jonas Eidevall‘s team were picked off by the dominant Blues, who barely gave their London counterparts a sniff throughout the contest.

Chelsea took all of three minutes to make their dominance pay off as Fran Kirby raced through to draw first blood, and the Blues got to half time 1-0 up despite spurning numerous opportunities to extend their lead.

Arsenal largely had the efforts of Manuela Zinsberger to thank as they kept themselves in the game, but with 57 minutes on the clock, Kerr beat Lotte Wubben-Moy all ends up before firing home into the far corner.

Beth Mead attempted to provide the bright spark that Arsenal so desperately needed but her efforts proved futile, with star striker Vivianne Miedema anonymous throughout the 90 minutes.

With one hand firmly on the crown, Chelsea made sure of the win as Kerr raced through before delightfully dinking the ball over a stranded Zinsberger to wrap up the crown in style.

Chelsea have now won the women’s FA Cup for the third time following previous 2015 and 2018 triumphs, as Arsenal wait for their first crown since the 2015-16 season.