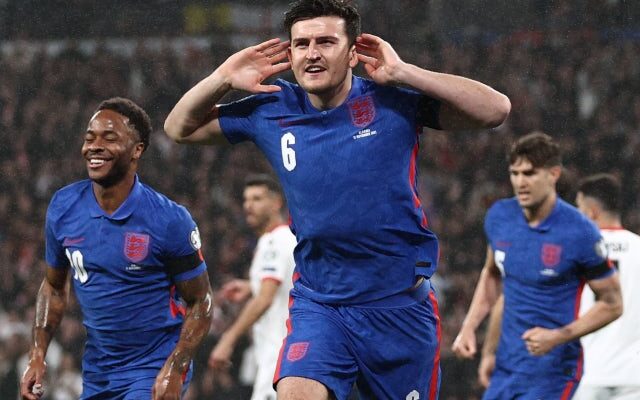 The centre-back opened the scoring after just nine minutes of the encounter at Wembley, meeting Reece James‘s free kick with an accurate header at the back post.

Maguire – who has been widely criticised for his Red Devils performances this term – proceeded to celebrate by cupping his ears, which did not sit well at all with Keane.

Speaking to ITV, Keane said: “I think he puts his hands to his ears like he’s shut the critics up but I think that’s embarrassing. He’s been a disgrace the last few months for Manchester United. If he thinks he scores he’s going to shut his critics up… embarrassing.”

Maguire defended his celebration in his post-match interview, though, saying: “[The celebration] wasn’t directed at no one (sic). It was a knee-slide and I put my hands on my ears.

“I’m Manchester United captain. Of course I’m going to get criticism when the team isn’t doing well, I fully expect that, but the celebration wasn’t directed at anyone.”

England need just one point from their clash with basement boys San Marino on Monday to guarantee top spot in Group I following Friday’s emphatic 5-0 success.