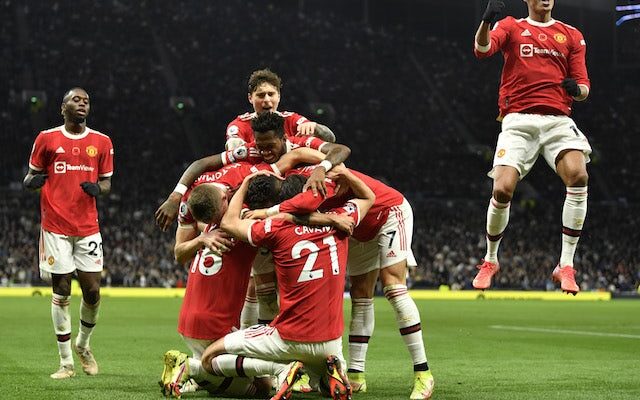 Manchester United eased the pressure on under-fire head coach Ole Gunnar Solskjaer with a 3-0 victory over Tottenham Hotspur in the Premier League on Saturday night.

Aiming to bounce back from their five-goal defeat at home to Liverpool, Man United lined up in a back three, with fit-again Raphael Varane returning to the side, while Edinson Cavani joined Cristiano Ronaldo in attack.

Ronaldo ended his four-game Premier League goal drought with the opening effort at the Tottenham Hotspur Stadium, as the Portugal international expertly volleyed a floated Bruno Fernandes pass into the bottom corner in the 39th minute.

The 36-year-old then turned provider in the 64th minute, as he played in Cavani, who expertly rounded Hugo Lloris before finding the back of the net.

Tottenham struggled to get going for then majority of the contest in North London, with Harry Kane, who has just one Premier League goal to his name this season, finding it difficult to contribute.

Man United made sure of the points in the 86th minute of the contest when second-half substitute Marcus Rashford broke into a shooting position after collecting a fine pass from Nemanja Matic before slotting the ball into the far corner of the net.

The result has moved the 20-time English champions into fifth position in the Premier League table, now just three points behind third-placed Manchester City ahead of next weekend’s Manchester derby.

Solskjaer’s side will now be bidding to make it three Champions League victories in a row when they travel to Italian side Atalanta BC on Tuesday night.