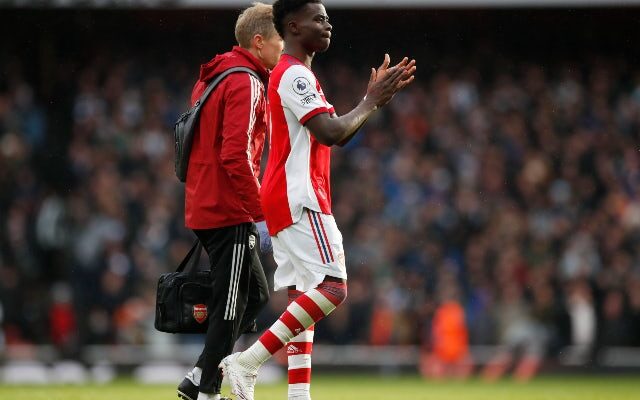 Arsenal boss Mikel Arteta has confirmed that Bukayo Saka had to be taken off after feeling a “muscular” issue against Newcastle United.

The England international opened the scoring against the Magpies before going down feeling his groin, although he attempted to continue before being hauled off for Gabriel Martinelli.

Saka was pictured laughing and joking on the bench with his teammates during the dying embers of the clash, and Arteta has now updated fans on the attacker’s condition.

Speaking to reporters at his post-match press conference, Arteta said: “Yeah, he felt something muscular and let’s see what it is.

“It was an action where he said he felt something. He wasn’t comfortable to continue and we’ll have to assess him tomorrow and probably scan him to see if there’s any injury there.”

Saka’s replacement Martinelli rounded off the scoring with a delightful second in that 2-0 win, during which Pierre-Emerick Aubameyang produced a contender for miss of the season in the first half.