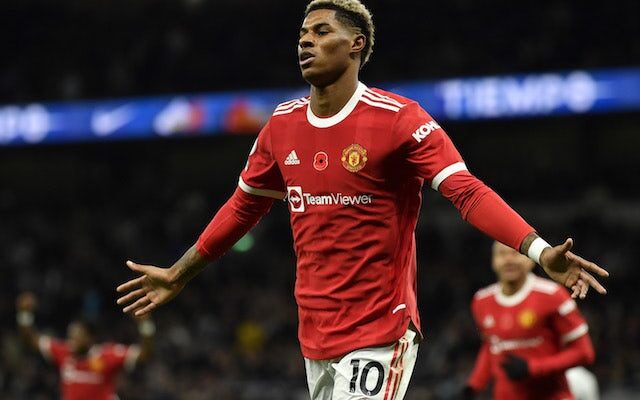 Marcus Rashford has said that Manchester United were determined to bounce back from “a difficult week”, with the Red Devils recording a 3-0 victory over Tottenham Hotspur on Saturday evening.

Ole Gunnar Solskjaer’s position as head coach has been widely questioned over the last week, with the 20-time English champions suffering a 5-0 home defeat to Liverpool last weekend.

However, Man United managed to return to winning ways in the Premier League on Saturday, as goals from Cristiano Ronaldo, Edinson Cavani and Rashford saw them record a 3-0 win in North London.

Rashford has insisted that there is “more to come” from the Red Devils, who have moved into fifth position in the Premier League table, three points behind third-placed Manchester City ahead of next weekend’s Manchester derby.

“It’s obviously been a difficult week, it is for any team when you don’t win. We’ve responded the only way we know how. The staff, the players all want to win,” Rashford told Sky Sports News.

“Playing for Man Utd there’s always pressure, you have to learn to enjoy it. Part of playing for this club is to come out of difficult moments. This club has always bounced back.

“I think [Ole Gunnar Solskjaer’s] prepared for the team we’re playing against. We all have to buy into what the manager tells us to do. Today that helped us come away with the three points. There’s more to come [from us]. As long as we keep improving, keep picking up points, we’ll see where we are come the end of the season.”

Man United will be bidding to make it three straight Champions League victories when they travel to Italy on Tuesday night to take on Atalanta BC.