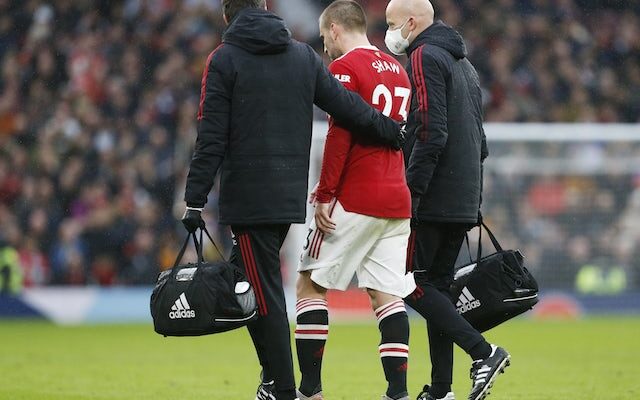 Manchester United have said that Luke Shaw “will now be monitored by club medical staff” after leaving the field with a suspected concussion against Manchester City on Saturday afternoon.

The left-back had to be replaced in the second half of his side’s 2-0 loss in the Manchester derby after falling awkwardly following a challenge with Rodri.

Shaw, as it stands, is due to link up with the England squad for their upcoming 2022 World Cup qualification fixtures, but Man United have said that the 26-year-old will have to be assessed to determine the extent of the problem before a decision on his international involvement is made.

“The defender has been named in the England squad for the upcoming World Cup qualifiers against Albania next Friday and San Marino (Monday 15 November),” read a statement on Man United’s official website.

“However, whether he will link up with Gareth Southgate‘s side will depend on an assessment of the problem and a check on the concussion, that led to United making four substitutions.

“Shaw’s head injury was managed in accordance with FA guidelines and he was removed from the field of play as soon as a concussion was suspected. Luke will now be monitored by club medical staff, following The FA return to play protocol, and England will be kept updated on progress.”

The defender has made 14 appearances for Ole Gunnar Solskjaer‘s side in all competitions during the 2021-22 campaign, contributing two assists.