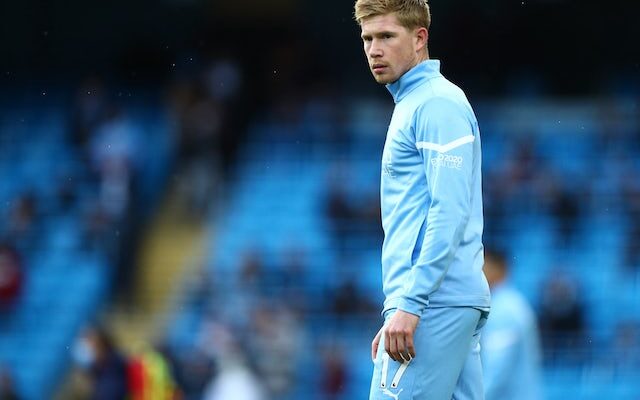 The 30-year-old returned to Manchester earlier this week after representing Belgium in World Cup qualifiers against Estonia and Wales, scoring against the latter in a 1-1 draw on Tuesday.

However, De Bruyne has since returned a positive test for COVID-19 and the midfielder – who has been vaccinated – will now isolate for 10 days.

Speaking to the press, Guardiola said: “Unfortunately Kevin got a positive Covid test in Belgium and needs ten days (to isolate).

“We found out two days ago, he is here. Forget about fitness and momentum, he is positive now he has to recover. We have to be careful, people are dying from Covid, he is vaccinated so hopefully he will be okay. There is no concern about rhythm it’s about the human being.

“The symptoms will be minor hopefully. As soon as possible, he can come back. We do not worry about what we are going to miss. The person is more important. We have to help him and hope it goes well while he’s isolated.”

Guardiola has also confirmed that summer signing Jack Grealish is ruled out of Sunday’s game with a “small injury”, while Phil Foden picked up a knock while training with England but is in contention to feature against the Toffees.

The Citizens, who are currently second in the Premier League, will be looking to claim all three points at the Etihad Stadium as they seek to close in on league leaders Chelsea.