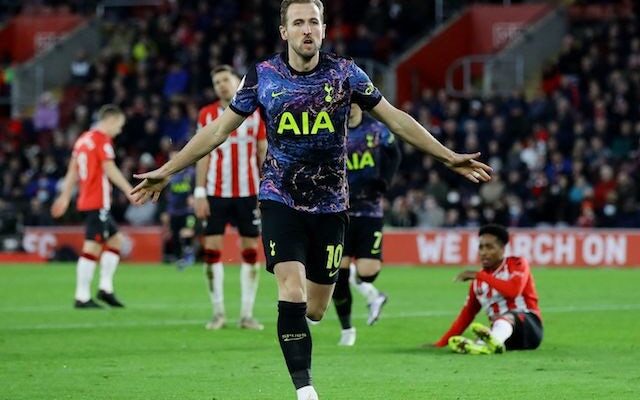 Manchester City will reportedly consider testing the waters once again with Tottenham Hotspur for striker Harry Kane in the January transfer window.

The Citizens were heavily linked with the 28-year-old over the summer, however, they were unwilling to match his £150m valuation set by Spurs chairman Daniel Levy.

Following the confirmation of Ferran Torres‘s move to Barcelona, as well as Sergio Aguero‘s departure to Camp Nou over the summer, City are expected to recruit a new centre-forward in one of the upcoming transfer windows, with Kane still believed to be their primary target.

Having operated without a recognised striker throughout this season, Pep Guardiola is ‘looking into how he can reinvent his front line’ according to Eurosport, via the Manchester Evening News.

A January offer to sign Kane is being considered by City’s hierarchy, while Borussia Dortmund‘s Erling Braut Haaland and Fiorentina‘s Dusan Vlahovic are also being closely monitored ahead of the New Year.

The Premier League leaders may, however, decide to wait until the summer to re-evaluate their options, with the likes of Bernardo Silva, Phil Foden and Raheem Sterling to feature in a more central role for the second half of the season.

Kane had initially struggled for form with Tottenham earlier this season, but he has since found the net in each of his last three Premier League games, taking his total to four strikes in 16 top-flight matches.