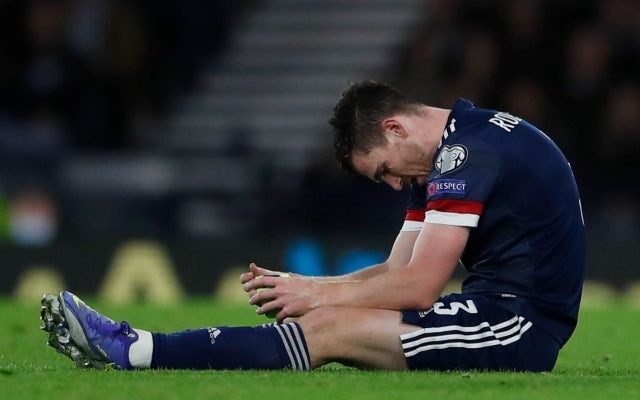 Liverpool defender Andy Robertson reportedly has a 50-50 chance of being passed fit for Saturday’s Premier League game with Arsenal.

The Scotland international went down in the second half of his side’s 2-0 win over Denmark with a suspected hamstring problem to hand the Reds another selection concern for the visit of the Gunners.

Jurgen Klopp also suffered scares with Jordan Henderson and Sadio Mane over the international break, although both men are thought to have good chances of lining up on Saturday.

According to The Athletic, Robertson’s scans did not reveal a serious hamstring injury, but the 27-year-old is suffering from tightness and is a doubt for the Arsenal game.

Kostas Tsimikas is on standby if required, with the Greek defender impressing with his displays down the left-hand side when handed opportunities this season.

Robertson has three assists to his name from 12 appearances in the 2021-22 campaign, and he has played the full 90 minutes in Liverpool’s last three Premier League games.