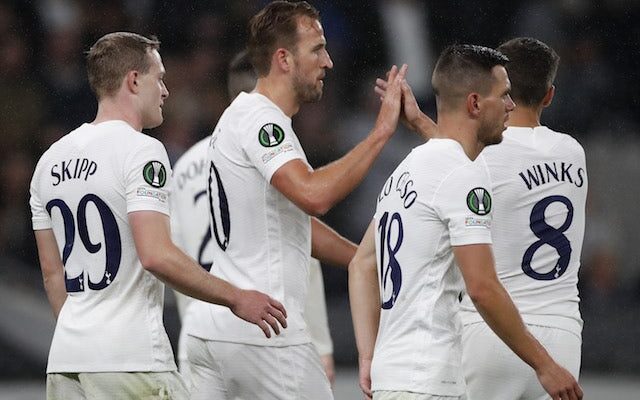 Antonio Conte is set to take charge of his first game at Tottenham Hotspur on Thursday, with Vitesse lying in wait in the Europa Conference League.

The Italian is expected to be granted his work permit in time to take control of the reins, but he will likely not be able to call upon Ryan Sessegnon and Bryan Gil, who are both nursing thigh injuries.

The former Chelsea and Inter Milan coach is sure to utilise his highly effective 3-5-2 system in North London, starting with Pierluigi Gollini coming in for Hugo Lloris in goal.

Conte ought to know plenty about Gollini and Cristian Romero from his time in Serie A, and the latter could join Joe Rodon and Japhet Tanganga in a three-man defence this week.

Ben Davies was a surprise starter in the defeat to Manchester United, so Sergio Reguilon could earn a recall here as Matt Doherty returns to his wing-back role on the opposite side.

Pierre-Emile Hojbjerg and Oliver Skipp should continue as Spurs’ two vital lynchpins with Conte in charge, while Dele Alli has another opportunity to reignite his Spurs career and could earn a rare start in the middle.

Lucas Moura‘s substitution for Steven Bergwijn against Man United was not well-received by the Spurs faithful, and the Brazilian may join Harry Kane at the tip of the Tottenham attack as Son Heung-min is rested.