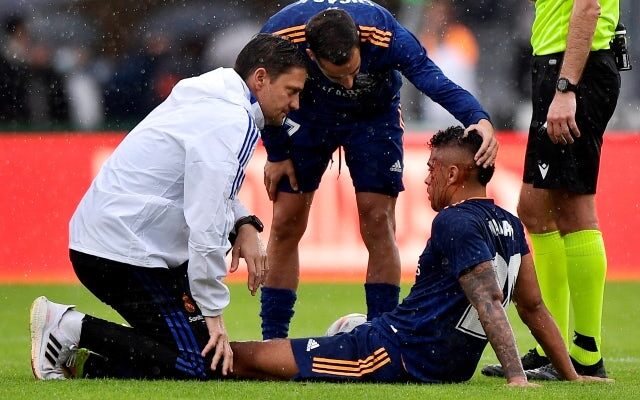 Real Madrid could be without up to six first-team players when they welcome Shakhtar Donetsk to the Santiago Bernabeu for their Champions League clash on Wednesday night.

Gareth Bale (hamstring), Dani Ceballos (ankle) and Federico Valverde (knee) are three players who will not be available as they continue to recover from their respective injuries.

Striker Karim Benzema is doubtful after missing last weekend’s 2-1 victory against Elche with a minor foot problem, though Carlo Ancelotti is hopeful that the Frenchman will be available to feature in midweek.

Brazilian winger Rodrygo will also be assessed ahead of kickoff after limping off in the 18th minute against Elche with a hamstring injury, while Mariano Diaz broke his nose in the same game after landing awkwardly and has since undergone surgery, so he is unlikely to feature on Wednesday.

Lucas Vazquez, Eder Militao, David Alaba and Marcelo could all keep their places in the back four, though full-back Dani Carvajal and Ferland Mendy will be hoping they can force their way back into the first XI.

Luka Modric, Casemiro and Toni Kroos – who all started against Shakhtar last month – are set to remain in central midfield, with Eduardo Camavinga and Isco options on the bench.

If deemed fit to play, Benzema should lead the line, while Eden Hazard is expected to replace Rodrygo on the right flank, which would see the Belgian start his first game for Los Blancos in over a month.

Vinicius Junior – who scored a brace against the Ukrainian outfit in the reverse fixture as well as two goals against Elche on Saturday – should keep his place on the left-wing and will be looking to add to his tally on Wednesday.