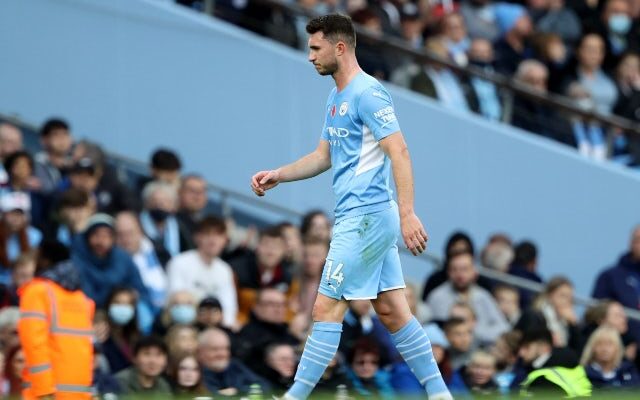 Manchester City will have to make do without the suspended Aymeric Laporte for Saturday’s Premier League derby with Manchester United.

The Spain international received a straight red card for a last-man foul on Wilfried Zaha in last weekend’s defeat to Crystal Palace and will serve a one-game ban at Old Trafford.

However, Pep Guardiola has no fresh injury concerns to work around, with Ferran Torres still facing another couple of months on the sidelines with a fractured foot.

John Stones scored an own goal against Club Brugge in the Champions League on Wednesday, but the Englishman will partner Ruben Dias here as Laporte watches on from the sidelines.

Kyle Walker and Joao Cancelo are indispensable in the full-back areas, while Rodri and Bernardo Silva are also primed for starts in the engine room.

A recent report claimed that Kevin De Bruyne was at risk of being dropped for the Manchester derby, but it seems likely that he will start over Ilkay Gundogan after only appearing as a substitute in midweek.

Gabriel Jesus and Riyad Mahrez both scored in midweek, but the former will hope to get the nod on the right-hand side, while Raheem Sterling has faced United 23 times without scoring and is unlikely to demote Jack Grealish to the bench.

With Torres still out of contention, Phil Foden – who has amassed 11 goals in his last 16 Premier League away games – should continue to spearhead the Citizens’ attack.