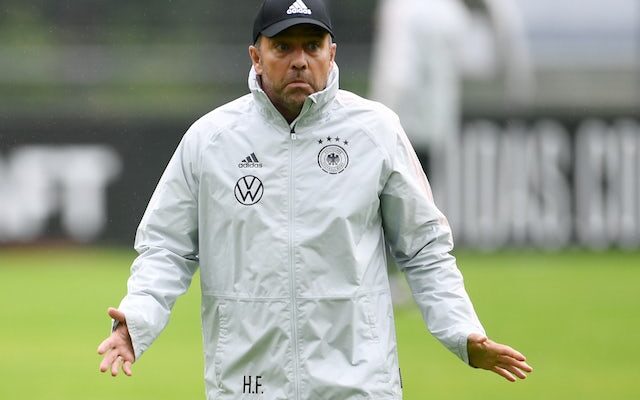 Germany boss Hansi Flick is set to be without as many as eight players for Thursday’s penultimate World Cup qualifier against Liechtenstein.

The German Football Federation announced on Tuesday that five players have been ordered to self-isolate after one of them joined the camp the day before and tested positive for coronavirus.

One report has claimed that Niklas Sule is the player to have tested positive, while Joshua Kimmich, Serge Gnabry, Jamal Musiala and Karim Adeyemi – who all tested negative but are understood to have been in close contact with the player who returned a positive result – are the other four players forced to self-isolate.

Flick will also be without attacking midfielder Florian Wirtz and defender and Nico Schlotterbeck, who have had to pull out of the squad this month with muscle injuries, with Ridle Baku, Maximilian Arnold and Kevin Volland brought in as their replacements.

Chelsea’s Kai Havertz is another who will miss Thursday’s clash as he will serve a one-match suspension following an accumulation of yellow cards.

With Timo Werner not selected in Flick’s 28-man squad due to a thigh injury and with Adeyemi now isolating, Wolfsburg forward Lukas Nmecha could be handed his senior debut up front, after receiving his first call up for the national team.

Flick has chosen not to select a natural right-back in his squad this month, so versatile winger Jonas Hofmann is expected to start in a four-man defence and could be joined by Antonio Rudiger, Thilo Kehrer and David Raum.

Bayern Munich’s Leon Goretzka is set to start again in centre-midfield and may be partnered by Manchester City’s Ilkay Gundogan, who has returned to the first-team set-up after injury forced him to miss last month’s qualifiers.