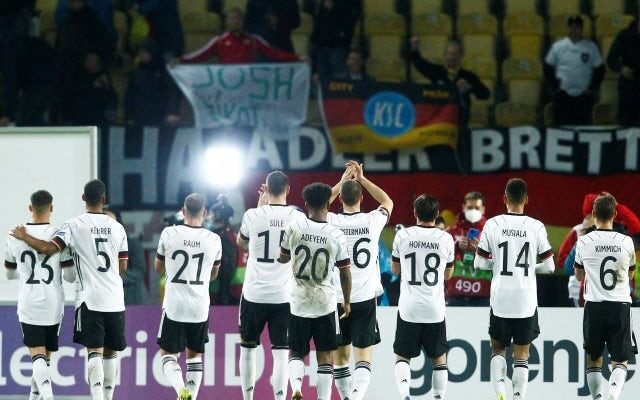 Germany will be forced to cope without Antonio Rudiger for their final World Cup 2022 Qualifying battle with Armenia on Sunday night.

The Chelsea man picked up his second booking in Thursday’s 9-0 thumping of Liechtenstein and will take his place on the naughty step this week, while his teammate Kai Havertz is back from his own suspension.

However, Havertz remains a doubt due to a bruised thigh, while Florian Wirtz and Nico Schlotterbeck – who would have been eyeing opportunities for starts – are also set to sit this one out.

Hansi Flick‘s side also remain without Joshua Kimmich, Serge Gnabry, Karim Adeyemi, Niklas Sule and Jamal Musiala due to COVID-19, and changes aplenty should be made for the final day.

Marc-Andre ter Stegen will hope to displace Manuel Neuer in goal, while Matthias Ginter and Jonathan Tah both have strong chances of replacing the suspended Rudiger in defence.

Leon Goretzka should be fine for this encounter despite taking a boot to the face last time out, but Florian Neuhaus is a strong option for change alongside Ilkay Gundogan.

A complete overhaul of the forward line could see Lukas Nmecha, Julian Brandt and Kevin Volland all given opportunities to impress, but Ridle Baku – who bagged his first goal for Germany in the Liechtenstein humiliation – may hold his place on the right.