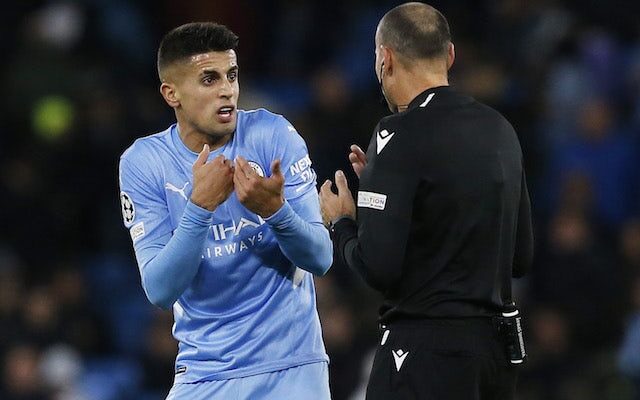 Cancelo, 27, made the move to the Etihad Stadium from Juventus in the summer of 2019, and has since become a key cog in Pep Guardiola‘s machine, performing well in both defence and attack.

Neville, who worked with Cancelo during his brief spell in charge of Valencia in 2015-16, believes the Portuguese international has now reached his potential and is pleased to see him excelling, albeit with United’s noisy neighbours.

“I made calls back to England and you can imagine to which club at the time… saying if you’re ever going to take a player, that’s a young player you take,” the 46-year-old told legendary commentator Martin Tyler on the Gary Neville Podcast.

“[I had] Not any doubt whatsoever about what this player was. He’s an athletic machine, he is a brilliant runner. He’s a beautiful runner with the ball. He’s a tough kid, as well, he’s strong and he’s brave. He impacts the game in defence and in attack.”

“He’s delivering on what I thought he would. You see players sometimes and they don’t realise their potential, he is realising his potential. I couldn’t be happier for him as a person, because I know how tough it was in Valencia at the time when he was there, when I was there.”

Cancelo has started every Premier League and Champions League game for Man City so far this season, and in his last two fixtures across all competitions – against Club Brugge and Man United – the full-back has provided five assists.