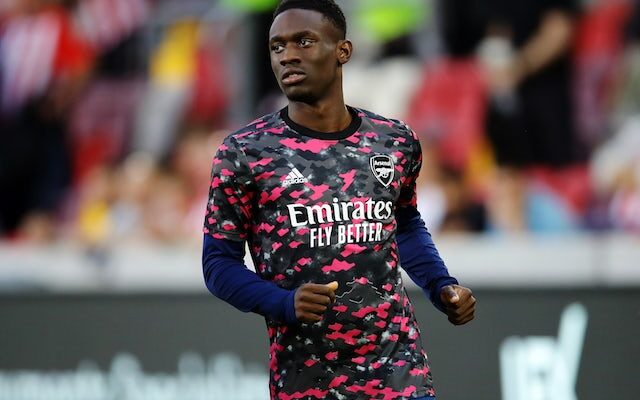 Arsenal starlet Folarin Balogun has hinted that his future may lie away from the Emirates as he continues to struggle for senior appearances.

The England Under-21 international featured in both of Arsenal’s first two Premier League games of the season but has not made the cut for a top-flight game since.

Balogun had seemingly put an end to the speculation surrounding his future by penning a new deal back in April, but the striker has admitted that he is “definitely open” to a new challenge.

Speaking to reporters, Balogun said: “I feel like I have played youth football for a while. I have scored goals at that level and improved at that level drastically compared to now. At the same time I am not sure what that challenge might be.

“It might be a loan, or if I am needed at Arsenal I am here and the gaffer knows that as well. I feel like I am definitely open to a new challenge, wherever it is I will be ready.

“As a striker and as a young player you need minutes. It is the best way to learn and get consistency. You just have to keep practicing, then you see the rewards and when you are ready you will take the opportunity.

“I would like to get minutes at Arsenal. I am not sure what his [Mikel Arteta‘s] plans are. We did speak prior to me signing my contract and he said I should trust in him and that he has a plan for me. That was a big reason I stayed and decided to resign.

“I wouldn’t say I know his plan, per se, but there is a plan and I have spoken about it with various people at Arsenal.”

Balogun has been in scintillating form for the Under-23s this term, netting 10 goals in eight Premier League 2 appearances for the Gunners, and he struck for England Under-21s against the Czech Republic on Thursday.