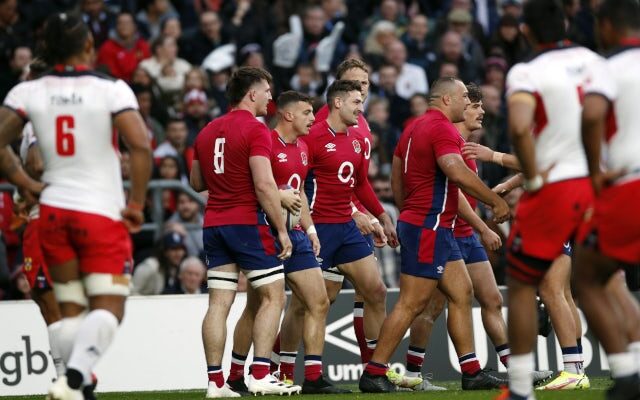 England have begun their autumn programme in perfect fashion, running in 11 tries on their way to a 69-3 victory over Tonga at Twickenham.

Even in the absence of captain Owen Farrell, who tested positive for coronavirus on Friday, England were two tries to the good inside 13 minutes through Adam Radwan and Jamie George.

Tonga got on the board with a penalty, but Jonny May, Maro Itoje and Ben Youngs made it five tries for the home side before the end of the first half.

With the score at 29-3 at the break, the one-way traffic continued as Youngs went over for a second of the afternoon, that try being followed by May also making it a double for the afternoon.

Viliami Fine was dismissed for Tonga with 11 minutes, a combination of a high tackle and his role in the aftermath, and that incident only encouraged England to push forward for further tries.

George became the latest player to bag his second of a routine afternoon, and Marcus Smith joined the party by touching down with seven minutes left.

The scoring was not over as Jamie Blamire, Smith and Alex Mitchell all heaped further misery on the visitors, handing head coach Eddie Smith the perfect result ahead of the remainder of their internationals over the coming weeks.