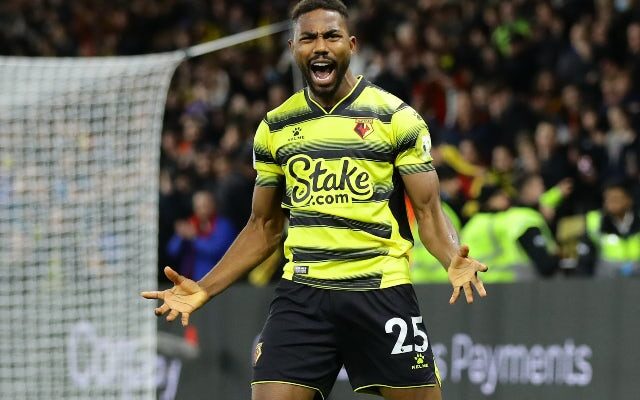 Manchester United were interested in signing Emmanuel Dennis during his time at Club Brugge, according to the attacker’s agent Drew Uyi.

The 24-year-old joined Watford in a £3.4m deal last summer and has impressed for the Hornets this season, scoring six times and registering five assists in 14 Premier League appearances.

According to Uyi, both Man United and Arsenal showed an interest in the Nigeria international during his time at Club Brugge, but neither club were prepared to meet the Belgian outfit’s £25m asking price.

“Arsenal were interested in the past and Manchester United were also interested, but for Club Brugge were demanding a ridiculous fee for him,’ Drew Uyi told The Football Show.

“They wanted £25m, while these clubs were prepared to pay £15m. In the end he joined Watford for £3.4m because his contract was running out.

“He was frustrated at Club Brugge, he was not happy because no young man would be if he were stopped from such opportunities [as Arsenal and Manchester United].”

Dennis has scored in three of his last four Premier League appearances, finding the back of the net against Man United, Leicester City and Chelsea during an impressive run of form.