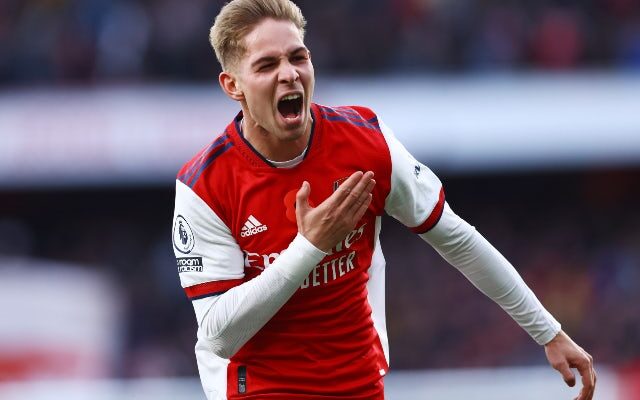 Emile Smith Rowe has revealed he turned down interest from Tottenham Hotspur earlier in his career in order to pursue his dream of playing for Arsenal.

The 21-year-old has enjoyed a memorable 11 months since making his Premier League debut last December, with his recent form leading to a first England call-up.

Smith Rowe spent eight years in Arsenal’s youth ranks before breaking into the senior ranks at the Emirates Stadium, where he has gone to make 58 appearances.

The young midfielder may now be an established name at Arsenal, but it would have been a different story had he made the switch to the other half of North London five years ago.

“Tottenham wanted me when I was 15 or 16 but, as an Arsenal fan, I was never interested,” he told The Guardian.

“I joined Arsenal at 10 and I was determined to make the grade at my club.”

Smith Rowe also opened up on a failed trial at fellow London side Chelsea at the age of seven.

“I went in for about three or four weeks but, at the time, I was quite small, really skinny and just kept getting pushed off the ball,” he said.

“I wasn’t getting involved and touching the ball enough. That’s what it felt like, why I didn’t get in.”

Smith Rowe will be hoping to make his senior England debut when the Three Lions face Albania at Wembley on Friday evening.