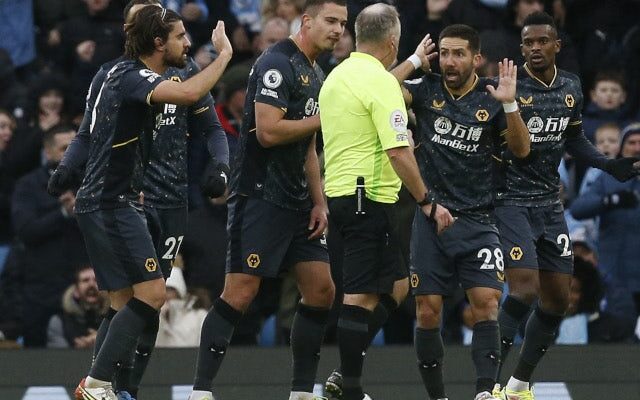 Despite the first-half dismissal of Raul Jimenez, Wolves reached the hour mark still on level terms before Joao Moutinho was adjudged to have handled the ball inside the area.

Although replays appeared to show that the ball hit the side of the Portuguese’s body, VAR stuck with the decision of the referee, rejecting the opportunity to advise him to look at the monitor.

Speaking after the game, Coady was quick to hit out at the decision as Wolves suffered another 1-0 defeat against a Premier League title challenger despite producing a strong performance.

Coady told BBC Sport: “For the game to be called on that, we are desperately disappointed because we have given everything.

“It wasn’t a penalty. I get on with referees really well and I haven’t got a bad word to say about them, but sometimes you can see with the player reactions, they tend to look like ‘yeah that’s a bit dodgy that one’.

“For a game of this magnitude to be decided on a contentious decision is massively disappointing.”

Wolves are next in action when they play host to Brighton & Hove Albion on Wednesday night.