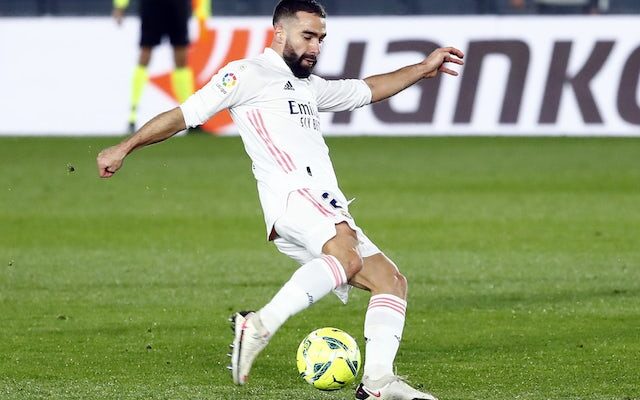 Dani Carvajal and Luka Jovic have been included in the Real Madrid squad for the Spanish Super Cup in Saudi Arabia, with Los Blancos preparing to take on Barcelona in the semi-finals.

Carvajal has recently been unavailable for selection due to a muscular issue, while Jovic recently tested positive for COVID-19.

Both players have been named in Carlo Ancelotti‘s travelling party, though, meaning that Mariano Diaz and Gareth Bale are the first-team squad’s only absentees.

Mariano is out with a hamstring problem, while Bale’s back issue means that the Wales international will not be able to feature in the Spanish Super Cup.

Dani Ceballos‘s recent recovery from an ankle problem has boosted Ancelotti’s options in midfield, while Real Madrid have also been able to recover those who recently tested positive for coronavirus.

Experienced duo Marcelo and Isco both continue to be linked with moves away from the Bernabeu but have also been included in the squad.