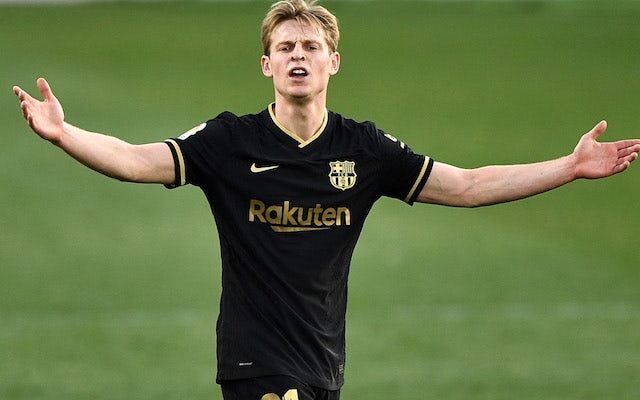 Barcelona would reportedly be willing to sell Frenkie de Jong for £75m during the January transfer window.

The Netherlands international has been a key player for the Catalan giants since his arrival, making 106 appearances in all competitions, contributing nine goals and 14 assists.

Barcelona will have to move players on in order to afford a deal for Manchester City‘s Raheem Sterling in January, though, and De Jong could allegedly be available for transfer.

According to El Chiringuito, the Catalan giants would be prepared to sell the central midfielder at the start of 2022 if they received an offer in the region of £75m.

Man City are thought to be weighing up a move in the winter window, having been strongly linked with the Dutchman during his time at Ajax.

De Jong, who still has five years left to run on his contract at Camp Nou, has provided two assists in 13 appearances at club level during the 2021-22 campaign.