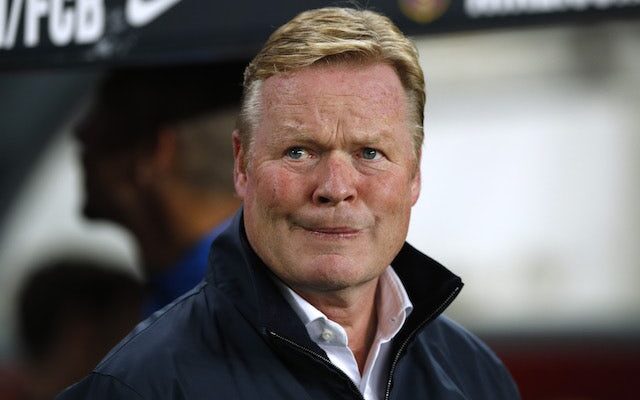 Ronald Koeman has been sacked by Barcelona following Wednesday’s 1-0 loss to Rayo Vallecano.
The 58-year-old was appointed head coach of the Catalan giants last August and led the club to the 2020-21 Copa del Rey title, but they disappointed in La Liga and the Champions League last term.

The Dutchman has also struggled to deliver consistent results this season, with Barcelona picking up just three points from their three Champions League group-stage fixtures.

The La Liga giants suffered a 2-1 home defeat to Real Madrid in El Clasico on Sunday, meanwhile, before losing 1-0 away to Rayo on Wednesday, and a statement confirming Koeman’s departure followed.

“FC Barcelona has relieved Ronald Koeman of his duties as first team coach. The president of the club, Joan Laporta, informed him of the decision after the defeat against Rayo Vallecano. Ronald Koeman will say goodbye to the squad on Thursday at the Ciutat Esportiva,” read the statement.

“FC Barcelona wishes to thank him for his service to the club and wishes him all the best in his professional career.”

Barcelona, who are believed to be considering appointing their former midfielder Xavi as a replacement for the departing Koeman, are back in league action against Alaves on Saturday night.