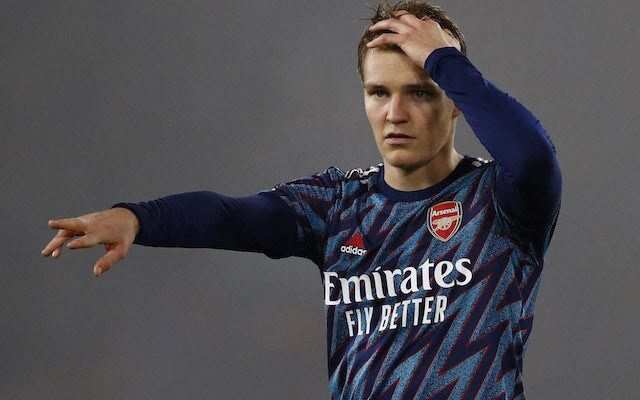 Arsenal starlet Charlie Patino has lavished praise on Martin Odegaard, claiming that he looks up to the “amazing” Norwegian.

Former Real Madrid starlet Odegaard arrived permanently in the summer of 2021 following a successful loan spell and has hit a rich vein of form in recent weeks.

Odegaard registered three goals and three assists in six Premier League games last month and has been nominated for the Player of the Month award for December alongside Gabriel Martinelli.

Teenage sensation Patino has now taken the time to laud his fellow midfielder, with the 18-year-old hailing Odegaard’s qualities during a FIFA Facebook livestream with YouTuber NepentheZ.

“Odegaard is amazing in training. He’s really settled in now. He’s a player I really look up to, he’s helped me a lot. Odegaard is very, very good,” Patino told the livestream.

Odegaard boasts a total of six goals and six assists in 40 games for the Gunners since initially arriving on loan last winter, while Patino will eye his first start for the club when they take on Nottingham Forest in the third round of the FA Cup on Sunday.