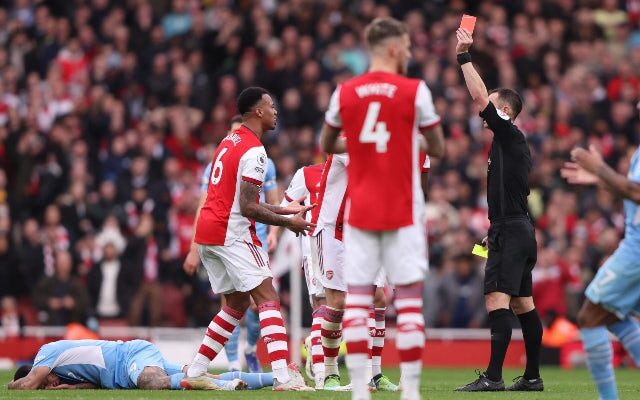 Arsenal have hit an unwanted Premier League red card milestone in their 2-1 defeat to Manchester City at the Emirates.

The Gunners got off on the right foot against the champions and took a deserved 1-0 lead into half time courtesy of Bukayo Saka‘s effort.

However, Arsenal imploded in the second 45 minutes and ultimately fell to a 2-1 loss on the day, with Gabriel Magalhaes seeing red for two yellow cards.

With Gabriel being made to take the walk of shame, Arsenal have now become the first team in Premier League history to receive 100 red cards in the competition.

Eleven of those have come under the tutelage of Mikel Arteta, with Granit Xhaka – whose foul on Bernardo Silva led to Man City’s equaliser from the spot on the day – being sent off in the 5-0 thrashing at the Etihad.

Arsenal remain in the top four for now despite the 2-1 defeat, while City now sit 11 points clear at the summit.