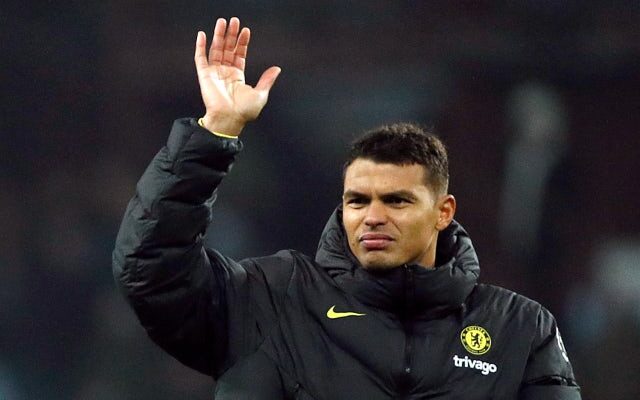 Chelsea have confirmed that Thiago Silva has signed a new deal with the club until the end of the 2022-23 season.

The 37-year-old formed a key part of Thomas Tuchel‘s Champions League-winning side last term and has remained an integral player for the Blues in the 2021-22 season.

Silva – who was due to become a free agent this summer – has started 14 Premier League games for Chelsea so far this term, and the former Paris Saint-Germain defender will be staying on for a little while longer.

“To play here with Chelsea is a real pleasure. I never thought I would play for three years here in this great club so I’m very happy to stay for another season,” Silva told the official Chelsea website.

“I would also like to say thanks to my family, the club, Marina and to Mr Abramovich for this opportunity. I will continue to give everything for this club and for the supporters, who have always been by my side since I arrived.

“It’s amazing to have this relationship with the fans and not only that but the players, staff and the whole club. I’m going to give everything to keep playing at this level in the most important league in the world.”

Chelsea director Marina Granovskaia added: “Thiago Silva’s experience, leadership and performances have been and remain very important to this squad, so we are hugely pleased to extend his contract by another year.

“We look forward to his continued influence as we seek honours this season and next, and more of the qualities that have led to him having such a big impact for us on and off the pitch.”

Silva has played 56 games for Chelsea since arriving in the summer of 2020, scoring four goals and assisting two more in all competitions.