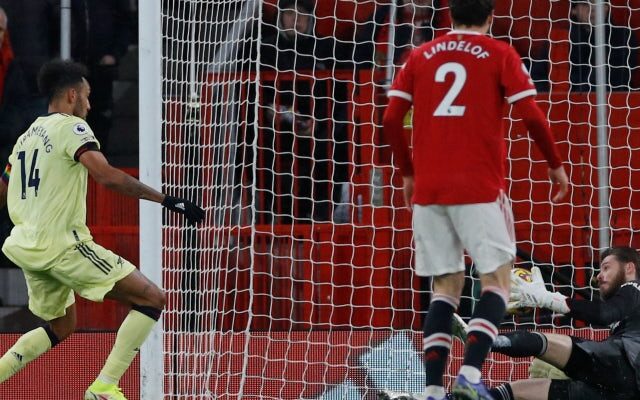 Arsenal captain Pierre-Emerick Aubameyang has lamented his wasted opportunity to score in the second half as Manchester United overcame the Gunners 3-2 on Thursday evening.

Five days after inexplicably missing from a yard out against Newcastle United, Aubameyang was picked out in acres of space at the back post but fired a tame effort straight at David de Gea.

Aubameyang was in an offside position and the goal would have been chalked off anyway, but the Gabon international has admitted that he should have done better in front of goal.

“We are a bit disappointed tonight because the team played very well. We could have got a better result,” Aubameyang told Amazon Prime. “In this time of game you need to be clinical defensively and offensively and you have to do the perfect game because of the quality of Manchester United.

“At the end of the first half we started to drop for too long and we conceded. In the second half we had the character to come back but in this type of game I have to stand up and score that opportunity and maybe get a point for us.

“I should definitely score that type of goal but I will not give up and I will keep trying to score goals. We did something very clear and we tried our best. It was very unlucky because I think the team deserved better today.”

United struck through Cristiano Ronaldo (2) and Bruno Fernandes on the day, with Emile Smith Rowe scoring a truly bizarre goal to break the deadlock at Old Trafford.