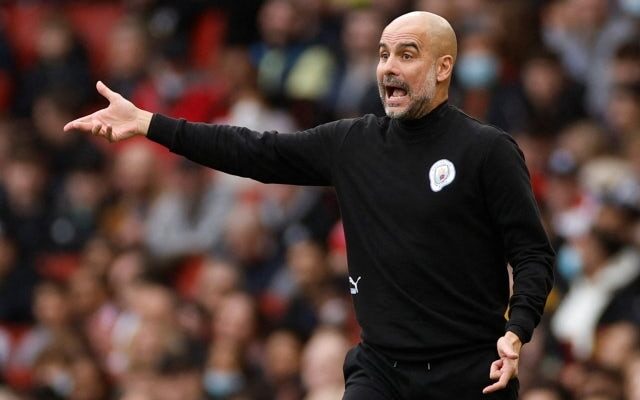 Pep Guardiola believes Arsenal were the better team even though his Manchester City side came away from the Emirates Stadium with a 2-1 victory on Saturday.

The Gunners backed up their impressive start to the first half by breaking the deadlock just after the half-hour mark, when Bukayo Saka tucked away his left-footed strike from just inside the penalty area.

However, the game turned on its head after the break in dramatic fashion, when Granit Xhaka‘s 57th-minute challenge on Bernardo Silva was deemed a penalty by VAR, and the spot-kick subsequently converted by Riyad Mahrez, before Gabriel Magalhaes picked up his second yellow card just two minutes later.

Both sides pushed for the winner but it was City who snatched it at the death, with Rodri scoring in the 93rd-minute to secure all three points for the Citizens, condemning Arsenal to an undeserved defeat in the eyes of Guardiola.

“Congratulations, they were better. Arsenal was better today. But football it’s happened,” the Spaniard said in his post-match interview for BT Sport.

“They had six or seven days since the last game at Norwich. We had two days since Brentford and come back and didn’t have a team. That’s why we put one more player in the middle. To have more control and passes. We know in the transitions with Saka and [Gabriel] Martinelli, the counter-attack with [Alexandre] Lacazette, should be difficult and it was difficult, we didn’t have energy.

“We tried, in the second half, one minute changed with the penalty, one minute the own goal (Aymeric Laporte having his header cleared off the line by Nathan Ake) and the sending off. We try to analyse many things, sometimes the coin falls on your side sometimes the other side.”

Man City kickstarted the New Year with their 11th successive Premier League victory which has now moved them 11 points clear at the top of the table, with their nearest challengers Chelsea and Liverpool to lock horns on Sunday.