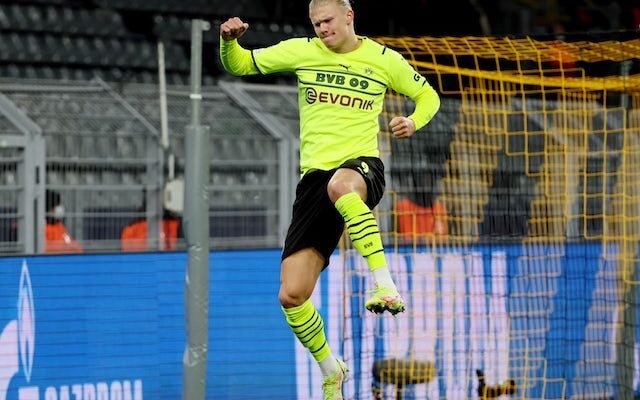 Haaland is set to be the subject of a hard-fought transfer battle between Europe’s top clubs at the end of the season, when a release clause in his contract means that he will be available for £68m.

The 21-year-old is wanted by just about every major club on the continent, with Real Madrid one of the front-runners and the likes of Barcelona, Manchester United, Manchester City, Chelsea, Bayern Munich, Juventus, Paris Saint-Germain and Liverpool having also been linked.

Dortmund CEO Hans-Joachim Watzke confirmed this week that Real Madrid are “especially” interested in Haaland, and some reports had claimed that an agreement could already be in place.

However, Raiola has rubbished those rumours and insists that the Norwegian will join the club that is best for him – which could also mean staying at Dortmund beyond the summer.

“Haaland can wait for everyone. We don’t have a pre-agreement with any club,” Raiola told NOS.

“We will look for the best option, and I also never ruled out another year at Borussia Dortmund.”

The Norway international has scored 19 goals and created five more in just 16 appearances across all competitions this season, and has 76 goals in 75 games for Dortmund in total.