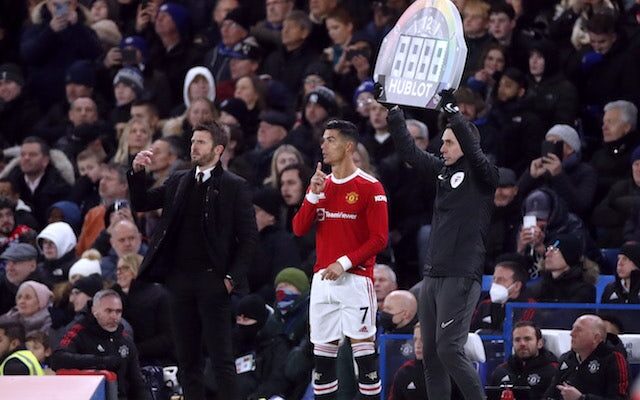 Michael Carrick has said that his decision to bench Cristiano Ronaldo against Chelsea was “blown up”, with there being no issues “within the camp”.

Ronaldo was surprisingly named among the substitutes against Chelsea in the Premier League on Sunday, with the Portugal international eventually featuring in the second period.

There have been suggestions that the experienced forward could find himself in and out of the side under new interim manager Ralf Rangnick, but Carrick has insisted that his call against the Blues did not cause any problems.

“I think those type of decisions get blown up really, I think a lot are. When you’re inside it, the team or the club, decisions are made for a lot of different reasons,” Carrick told reporters.

“Of course, certain ones get bigger news than others but that’s how it was. I didn’t see anything to make a decision, it certainly wasn’t within the camp or the group. We all got on really well, the game went well to an extent as well, and it wasn’t a drama at all.”

Ronaldo, who could be back in the side against Arsenal in the Premier League on Thursday, has scored 10 goals in 15 appearances for the 20-time English champions this season.