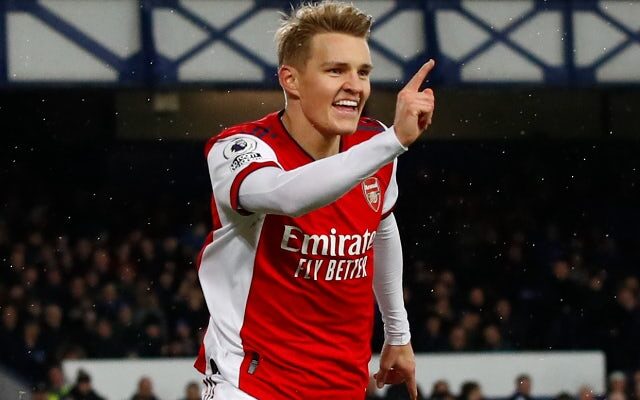 Arsenal playmaker Martin Odegaard has admitted that his side “stopped playing” against Everton as they slumped to a 2-1 defeat at Goodison Park.

The ex-Real Madrid man opened the scoring at the end of a first half devoid of any attacking quality before Richarlison and Demarai Gray turned the game on its head for the Toffees.

Mikel Arteta‘s side once again came under fire for their inability to maintain a 1-0 lead, and Odegaard believes that the current crop of players are “afraid” to lose.

Speaking to Sky Sports News, Odegaard said: “It’s a hard one to take. I think in general we were not at the level we needed to be at today. We had some good moments but we have to do much better. We should have been better.

“It’s hard to say. That’s just how it is sometimes. It’s hard to say exactly what happened. We have to do better when we have that lead. We stopped playing and gave them the game they wanted to play.

“I think it is [a mindset problem]. When you’re leading 1-0 you get afraid to lose the win and in my opinion that’s what we did wrong today. You go for the second goal and that was the intention but we didn’t manage to do that on the pitch.”

Odegaard struck for the second Premier League game in a row at Goodison Park, but Arsenal remain seventh in the table – four points adrift of the top four – after a sixth defeat of the league season.