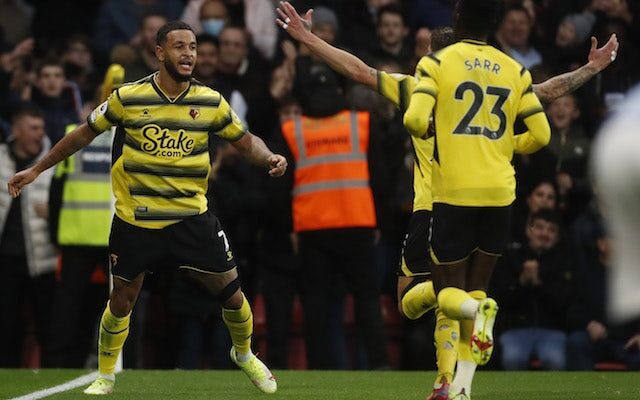 Manchester United were beaten for the fifth time in their last seven Premier League matches on Saturday afternoon, as the Red Devils suffered a 4-1 loss to Watford at Vicarage Road.

Donny van de Beek came off the bench to score for the visitors early in the second period after Joshua King and Ismaila Sarr had sent the Hornets into a two-goal lead at the break.

However, the 20-time English champions had club captain Harry Maguire sent off before Joao Pedro and Emmanuel Dennis scored two late goals for the home side.

The defeat, which has seen Man United drop down to seventh spot in the table, has piled the pressure on head coach Ole Gunnar Solskjaer, as the speculation surrounding his future continues to gather pace.

Mason Greenwood‘s absence through coronavirus opened the door for Jadon Sancho to start on the right, but there was still no spot in the Man United XI for Van de Beek, with Nemanja Matic preferred alongside Scott McTominay in midfield, as Fred started on the bench after his international commitments.

Watford were awarded a penalty in the sixth minute of the contest when Scott McTominay brought King to the deck with a clumsy challenge; Sarr saw his effort saved by David de Gea, but Kiko Femenia was on hand to covert the rebound from a wide position.

The penalty had to be retaken, though, for encroachment, and this time, Sarr saw his effort saved by De Gea, before Man United managed to clear their lines in a chaotic start at Vicarage Road. 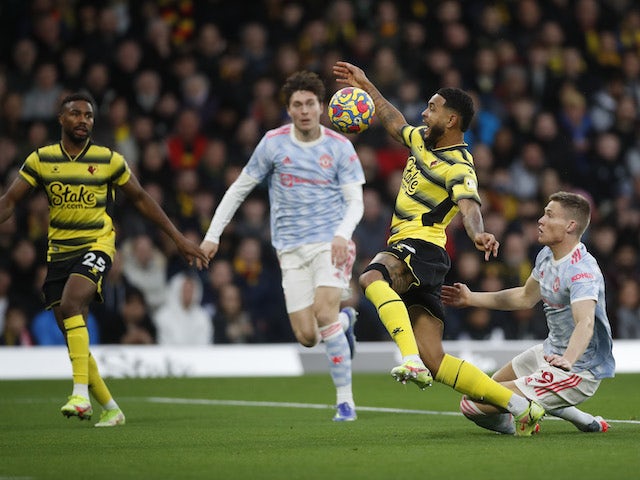 The away side’s first attempt came in the 13th minute when Cristiano Ronaldo worked his way into a shooting position, but his effort was deflected wide of the post.

Watford then broke clear in the 22nd minute through Sarr, who attempted to slide a low cross into the box, but Man United managed to clear their lines, before the lively King had a shot blocked from the resulting corner.

A mistake from Nemanja Matic then opened the door for Sarr to break into the Man United box, but Harry Maguire was across to make a smart block. 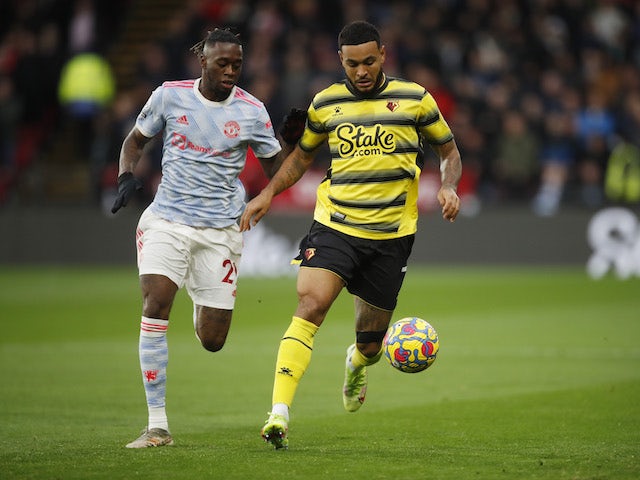 Watford made the breakthrough in the 28th minute of the contest, though, when a low cross from Emmanuel Dennis was turned into the back of the net by King.

Rashford had a volley saved by Ben Foster in the spell of Man United pressure that followed, but the home side looked capable every time that they broke forward with Sarr and King leading the fight.

Maguire needed to make an excellent sliding challenge in the 37th minute to prevent King from having another shot on goal, as Victor Lindelof was caught out with a clever pass from Dennis.

De Gea then had to keep out a header from King before Moussa Sissoko fired wide, as Watford continued to threaten during a difficult first half of football for the 20-time English champions.

The Hornets were not finished in the opening period, though, and doubled their advantage in the 44th minute when Sarr picked out the far corner of the net after being allowed all sorts of space inside the box. 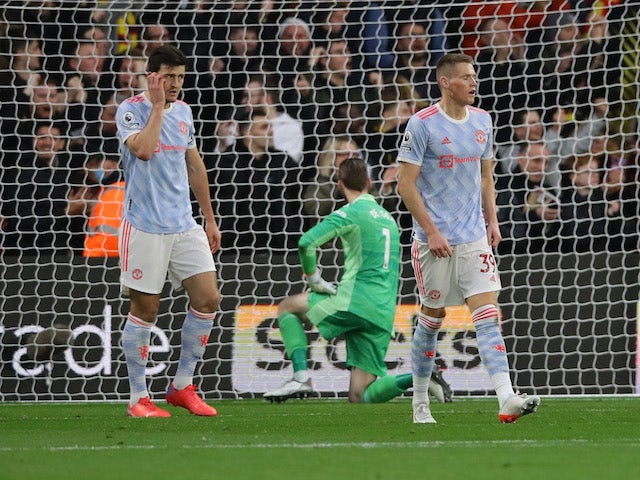 Solskjaer made two changes at the break, with Anthony Martial and Van de Beek coming on for McTominay and Rashford, and Van de Beek was immediately in the thick of the action making challenges.

The Netherlands international then managed to get his name on the scoresheet, heading home from close range in the 50th minute after Ronaldo had nodded one towards the midfielder inside the Watford box.

De Gea had to use his foot to keep out an effort from King moments later, with both teams throwing players forward during an end-to-end period of the match; Bruno Fernandes was next to try his luck, firing a Sancho cross wide of the post in the 55th minute.

Foster then had to keep out an effort from Ronaldo after a fine pass from Van de Beek had released the Portuguese, with the Red Devils improving in the second half following the two substitutions. 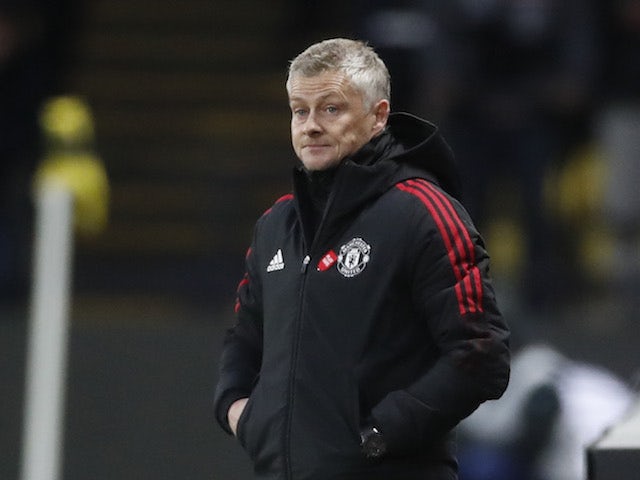 Matic drilled one wide of the post in the 68th minute, but two Watford substitutions, and a spell on the ground for Sarr, had just halted the moment that Man United were building, and the Red Devils were even more frustrated in the 69th minute when Harry Maguire was sent off.

Having already been booked, the Man United captain made a rash challenge on Tom Cleverley after losing control of the ball in a dangerous area, which saw him pick up a second yellow.

Ronaldo fired over the crossbar in the 72nd minute following more smart work from Van de Beek, before the Portugal international headed a Sancho cross just too high 15 minutes from time.

Ronaldo did have the ball in the back of the net moments later, only for the goal to be ruled out for offside, before Fernandes smashed one over the crossbar in the spell that followed. 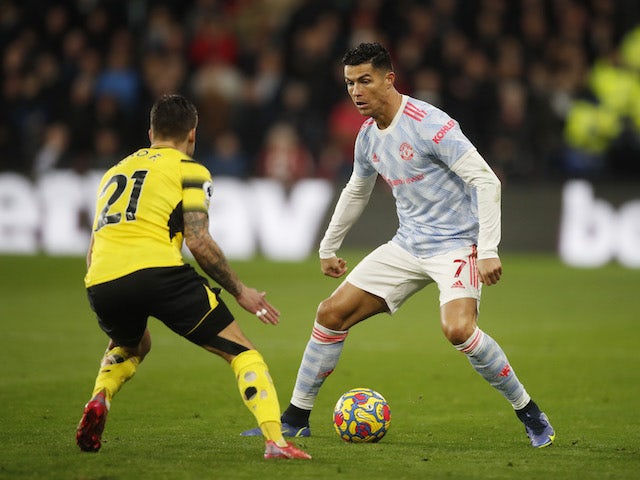 Joao Pedro headed just over the Man United crossbar in the 85th minute after Luke Shaw had been forced off with another facial injury, before King fired a long-range effort wide in the 90th minute.

Five minutes of additional time were issued, but there was to be no late rally from Man United, with their supporters left frustrated once again.

Watford were not finished, though, and made it 3-1 in stoppage time when Pedro managed to smash the ball past De Gea from close range, before Dennis netted a fourth in the final seconds.

Next up for Man United is a trip to Villarreal in the Champions League on Tuesday night before facing Chelsea at Stamford Bridge in the league, while Watford are away at Leicester City next Sunday.