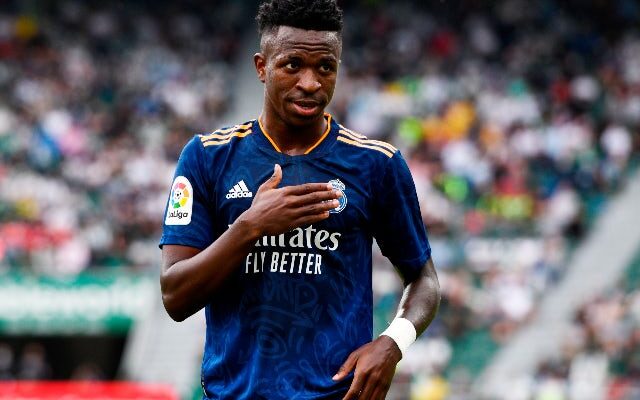 Manchester City could reportedly move for Real Madrid‘s Vinicius Junior this summer if the club are unsuccessful in their attempts to sign Erling Braut Haaland.

The Citizens are said to be leading the Premier League interest in Haaland, but Pep Guardiola‘s side are thought to be behind Real Madrid in the pecking order for the Borussia Dortmund striker.

According to El Nacional, Man City could switch their attention to Vinicius if the Norway international decides to move to Bernabeu during this summer’s transfer window.

Vinicius has been in impressive form for Los Blancos during the 2021-22 campaign, scoring 15 times and contributing nine assists in 27 appearances in all competitions.

The 21-year-old still has two-and-a-half years left to run on his contract with Carlo Ancelotti‘s side, but the La Liga leaders are said to be keen to agree a new deal with the Brazil international.

Vinicius, who largely operates as a left-sided attacker, has scored 29 goals and registered 32 assists in 145 appearances for Real Madrid since arriving from Flamengo in 2018.