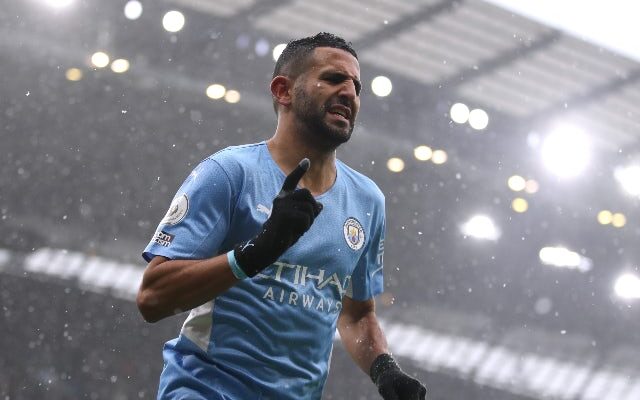 Manchester City manager Pep Guardiola has admitted that the absence of Riyad Mahrez will be felt while the winger represents Algeria at the African Cup of Nations next month.

The 30-year-old – who is the Citizens’s top goalscorer across all competitions this term with 12 strikes – will captain his nation who are vying to retain their AFCON crown in Cameroon.

With Mahrez potentially missing up to seven City matches across all competitions whilst on international duty, Guardiola has stated that, like any other first-team absentee, he will miss their presence in the squad.

Speaking to the press ahead of Wednesday’s Premier League clash with Brentford, Guardiola said: “Of course, I miss all the players, like Kyle [Walker], like John [Stones], like Riyad when he will not be here and Kevin [De Bruyne] when he was injured and we had to wait for him to come back at his best condition. I need all of them.”

Guardiola also revealed to reporters that both Kyle Walker and John Stones, who missed the Boxing Day win against Leicester City, will not be available for their trip to the Brentford Community Stadium.

As well as suffering with a minor knock, Walker is currently mourning the loss of close personal friend Dom Yarwood who tragically passed away earlier this month, while Stones is also recovering from a knock.

Guardiola added: “Of course, we are all sad for the tragedy of Kyle’s close friend passing away, but right now he cannot be with us because he is not fit and this is all I can say.”

Man City are looking to win their 10th successive Premier League game and move nine points clear at the top of the table when they face Brentford for the first time since 1997 in West London.