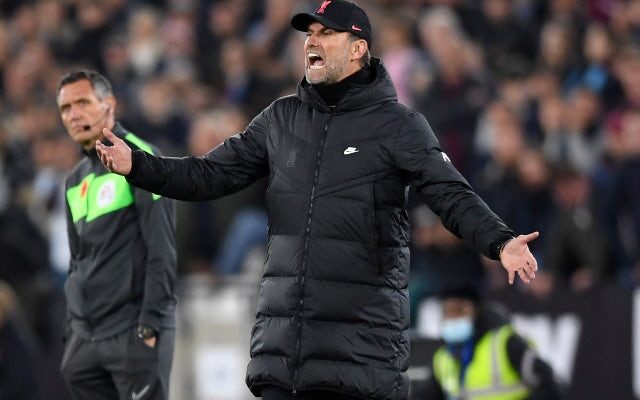 David Moyes‘s men opened the scoring when Pablo Fornals‘s corner ended up in the back of the net off of Alisson Becker, who was under pressure from Angelo Ogbonna.

The infuriated Reds saw their calls for a foul waved away by VAR as West Ham went on to prevail 3-2 in a thrilling contest, but Klopp believes that the officials missed a “clear foul” on his goalkeeper.

Klopp told reporters at his press conference: “I think it’s a clear foul on Alisson, how can it not be? The arm from Ogbonna is there. I really don’t know who was VAR today.

“You always have to say that the ref maybe in the game can’t see that, but in the situation when you see how the dynamic of the whole situation, when they all go down, how close they are, they are like in each other. How can that not be a foul already, without pushing the arm of Alisson away?

“It is, for me, a clear foul and the goalie is the loneliest person on the pitch in this moment because nobody helps him, he just gets attacked and in the end the ball is in and he looks a bit dumb and that’s it.”

Liverpool have dropped to fourth in the Premier League table before they meet Arsenal – who are now only two points behind them – after the international break.