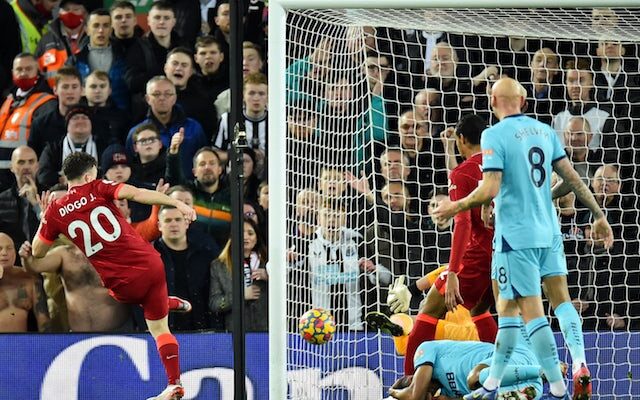 Liverpool have broken an all-time club goalscoring record which had stood for 64 years courtesy of their equaliser against Newcastle United at Anfield this evening.

The Reds unexpectedly fell behind early on against their relegation-threatened visitors through former Liverpool man Jonjo Shelvey, but that lead lasted less than 15 minutes before parity was restored.

The equaliser came in controversial fashion as Newcastle only half-cleared a corner, which Liverpool recycled and clipped back into the box despite the Magpies having Isaac Hayden down inside the area.

Referee Mike Dean opted not to stop play despite the threat of a head injury, and Diogo Jota proceeded to beat Martin Dubravka at the second attempt having seen his initial header well saved.

The goal means that Liverpool have now scored in 32 consecutive matches across all competitions, stretching back to a goalless stalemate with Real Madrid in the Champions League on April 14.

Liverpool’s previous record of scoring in 31 successive league and cup outings had stood for over 60 years, having achieved that feat from April 1957 to January 1958.

Jurgen Klopp‘s men soon added another to their tally too, with Mohamed Salah putting the title challengers ahead just four minutes later.