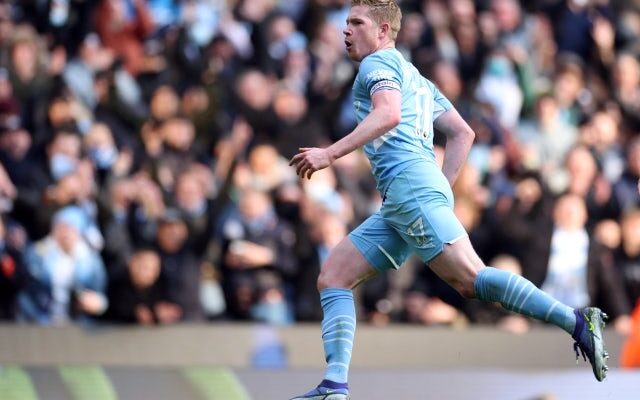 After a goalless first half, the deadlock was broken in the 70th minute when De Bruyne drove at Chelsea’s backline before cutting inside from the left and curling his brilliant 20-yard effort beyond Kepa Arrizabalaga into the bottom-right corner.

De Bruyne has now scored five league goals against his former club; the most by any player versus the Blues after having previously played for them in the top flight.

Thomas Tuchel‘s side struggled to cause City problems in the final third, and they failed to register a single shot in the first half for the very first time since the German took charge in January last year.

Frustration grew for the visitors after the break, and while City had few clear-cut chances of their own, another dominant display with the ball from Pep Guardiola‘s side was enough to secure their 12th successive top-flight victory.

City have now moved an alarming 13 points clear at the top of the table; never in Premier League history have a team with such a lead at the summit, with 16 games remaining, failed to win the title.

As for Chelsea – who have won only three of their last nine league games – they remain in second place, one point ahead of Liverpool in third, who have two games in hand, including their home clash with Brentford on Sunday.

The Citizens will now turn their attention to next weekend’s trip to St Mary’s against Southampton, while the Blues prepare for their away encounter with Brighton & Hove Albion on Tuesday night.