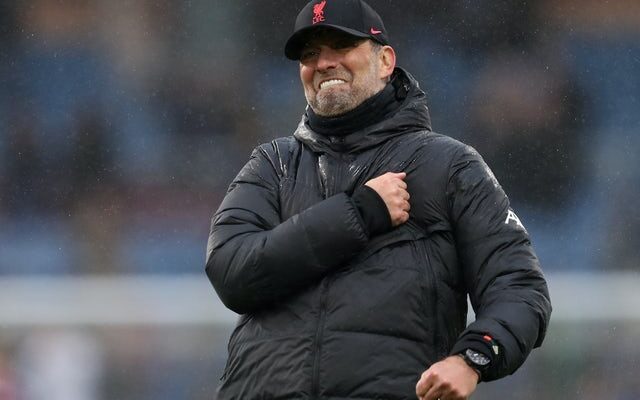 Liverpool manager Jurgen Klopp has described his side’s 1-0 win over Burnley on Saturday as “a perfect afternoon”.

Fabinho stabbed home a scrappy opener shortly before half time at Turf Moor, and that proved to be the only goal of the game as Liverpool closed the gap to leaders Manchester City back to nine points.

Bottom-of-the-table Burnley had chances of their own to dent Liverpool’s title hopes and boost their own survival chances in the process, but the visitors held out for a valuable three points.

Speaking after the game, Klopp told Sky Sports News: “A perfect afternoon. Raining and windy. We scored from a set piece and it was a brilliant goal to be honest, a counter pressing goal.

“Everything today was set up to be a banana skin for us. The balls in the air were so tricky to defend because the wind came from all directions. We played the circumstances rather than suffered from them.

“Most of their chances were offside but of course they had their moments, that is clear. They have quality but we dealt with it pretty well.

“We like each other, we respect each other. We have to work incredibly hard and that is what the boys did. We made our shirts dirty. I am really happy because I know how difficult it is to come here. Absolutely satisfied.”

Liverpool will now turn their attention to the Champions League, with the first leg of their last 16 tie against Inter Milan to come on Wednesday night.