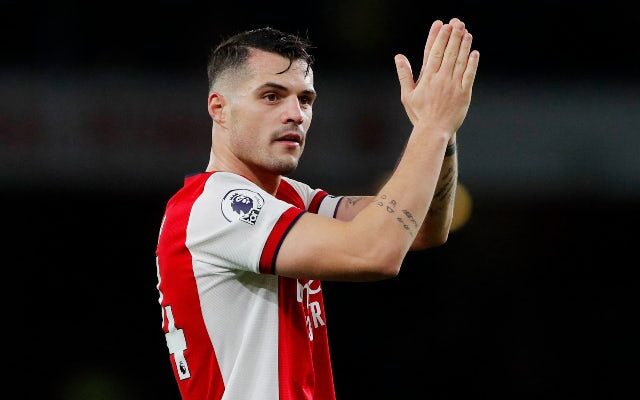 Arsenal midfielder Granit Xhaka has claimed that he is unfairly treated compared to other players in the Premier League when it comes to red cards.

The Switzerland captain has developed a reputation for being ill-disciplined during his time at the Emirates, and he has been sent off four times in the Premier League.

Xhaka’s most recent red card came in the 5-0 defeat to Manchester City back in August, but the 29-year-old believes that other players in his position would not always be made to take the walk of shame.

Speaking to The Athletic, Xhaka said: “When I came to the Premier League everybody said in this league you can go very hard (he bashes his fist into his palm) and I love it, this is exactly my game and what I want to do.

“But when you see some tackles and imagine if I was in this position? I would be sent off straight away. This stops me sometimes to go in how I really want. If I really go how I want I will get a red card every three or four games.

“If I risk I know I am closer to a red card than any other player in the Premier League. Maybe I am wrong but that is what I feel. So sometimes in a game I stop myself from going for the risky ones because if I get a red card it all starts up again.

“When I once got a red card, the referee said to one of my team-mates, ‘You know how Granit is, he loses his head’. This feels wrong. Just because I lost my head against Burnley, for example, it is not like I lose my head every time. To put me in this box like this I believe is wrong.”

Xhaka has also collected 45 Premier League yellow cards over the course of his Arsenal career, including bookings in the Gunners’ last two games against Leeds United and Norwich City.