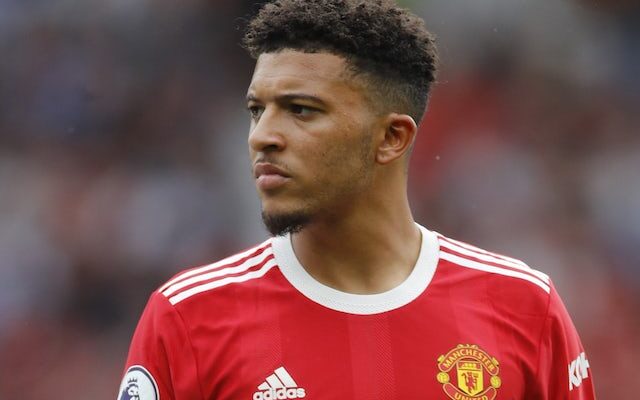 Gary Neville has sent a warning to Jadon Sancho that he could end up being in a similar position to Donny van de Beek at Manchester United.

The England international was an unused substitute for the second game in a row during the 3-0 victory against Tottenham Hotspur on Saturday, which has caused concern for the Sky Sports pundit.

Sancho has yet to earn a regular starting place in Ole Gunnar Solskjaer’s team and Neville believes that he could end up in a similar position to the Dutch midfielder.

“Do you know something, I cannot help but think about Van de Beek. Who has put the name on him, who is sponsoring him at Manchester United, that kid who has sat in the stands and not kicked a football?

“Sancho if he is not careful, is going to end up exactly the same. He has played in some pretty appalling performances, not him, I mean team performances. He has come into a club that is looked totally disjointed in terms of their football,” he told Sky Sports.

The former Manchester United defender admitted that he is not sure where the former Borussia Dortmund attacker will fit in if the club continues with the same formation.

“I do not see him in the two in midfield or the two upfront, so he is thinking where does my career go at Manchester United and Van de Beek is thinking the same.”

Sancho has yet to register a goal or an assist for the Red Devils since he joined the club in the summer for a fee of £73m.