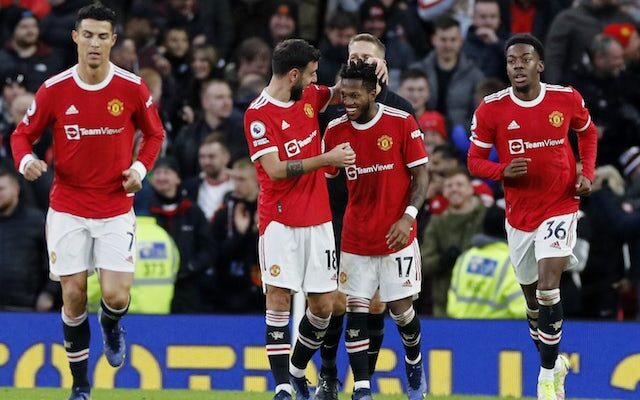 Fred scored the only goal of the match in the 77th minute as Manchester United recorded a 1-0 victory over Crystal Palace at Old Trafford on Sunday afternoon.

Under the management of Ralf Rangnick for the first time, Palace had threatened to claim a point in Manchester, with the Eagles defending brilliantly for much of the contest and also threatening down the other end of the field.

However, Fred expertly swept the ball into the far corner of the net after smart work from Mason Greenwood to make it a winning start for Rangnick at the helm, while the match produced Man United’s first home league clean sheet of the campaign.

The victory has moved the 20-time English champions into sixth spot in the Premier League table, just three points behind fourth-placed West Ham United on the same number of games (15).

Rangnick had named the same side that took to the field for the first whistle against Arsenal on Thursday, but Greenwood and Anthony Elanga were both introduced in the second half, with the Red Devils desperately looking to make the breakthrough against Patrick Vieira‘s side.

Man United are next in action against Young Boys in the Champions League on Wednesday, and there is likely to be wholesale changes to the starting side, with the club already booking their spot in the last-16 stage of the competition as group winners.

The 20-time English champions will then be bidding to make it three Premier League victories in a row when they travel to Norwich City on Saturday afternoon.