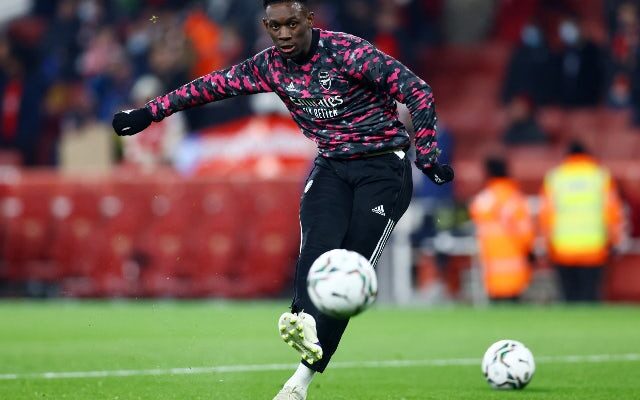 Arsenal striker Folarin Balogun is reportedly set to join Middlesbrough on loan for the remainder of the 2021-22 season.

The England Under-21 international signed a new four-year deal with Arsenal in 2021 but has struggled for opportunities in Mikel Arteta‘s first XI this season.

With only two Premier League appearances under his belt in the 2021-22 season, Balogun has been tipped to head out on loan for the final six months of the campaign.

Sheffield United attempted to sign Balogun during Chris Wilder‘s tenure, and The Express now reports that the striker will now link up with the former Blades boss at Middlesbrough.

The report adds that confirmation of the 20-year-old’s temporary switch to the Riverside Stadium can be expected before the end of the week, and the Championship side will fork out the entirety of his weekly £40k wage during his loan spell.

Balogun has not played in the Premier League since August but boasts 13 goals from 11 Premier League 2 games for the Gunners’ Under-23s this season, as well as two strikes in the EFL Trophy.

The former USA youngster has made 10 appearances for the Gunners’ first team in total, registering two goals and one assist in the Europa League last season.